Polymers with a space globular structure (SGS-polymers) were first synthesized in the USSR as the type of ion-exchange resins in the middle of 20th century. 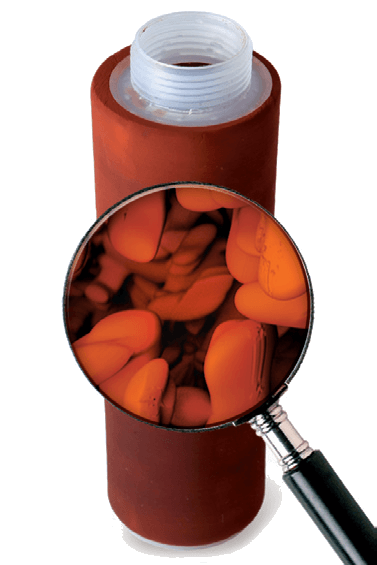 Today only Geyser has a serial production technology of this material. SGS-polymers are radically new material combining three types of filtration: mechanical, sorption, and ion-change filtration. None of known sorption materials can remove such a wide range of chemical compounds as SGS-polymers do.

Microglobules, i.e. long polymer chains convoluted in coil, are formed in the process of synthesis of the SGS-polymers. Being aggregated these microglobules provide porous and still mechanically strong structure. 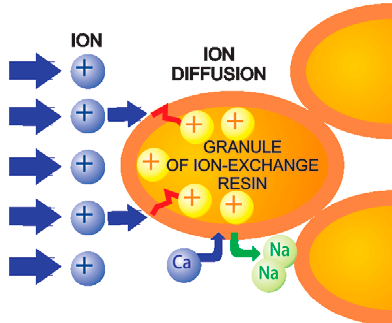 Microglobules have large inner surface (up to 500 m²/g). The surface itself is coated with active groups on which the ion-exchange processes are performed. The removable ions directly interact with a chemically-active polymer surface missing typical for ion-exchange resins stage of granule inward diffusion. As a result the rate of the volumetric filtration of the SGS-polymers is 10-20 times higher compared to common granulated ion-exchange resins. This is a decisive advantage of the SGS-polymers. 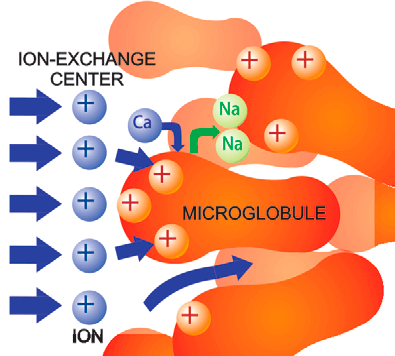 The removal of mechanical impurities is mainly performed in surface layers of polymer. The pore size can vary in any range from 0.01 to 3.5 mkm. The required porosity of the material can be obtained by changing the synthesis conditions with an accuracy of no more than 10%.

Currently nearly 30 modifi-cations of the SGS-polymers have been studied and the operation procedures for their production were developed. The materials with both cation- and anion- exchange properties were also synthesized.

Application field of the SGS-polymers is wide and include purification of:

ARAGON — resorcin-based polymer shows the best results in complex removal of harmful impurities from water. It has successfully passed strict compliance tests to Russian and International standards to be used in drinking water purification systems. Dissolved chemical elements (from aluminum to heavy and radioactive metals) and their compounds are removed from water by means of ion-exchange and sorption mechanisms. 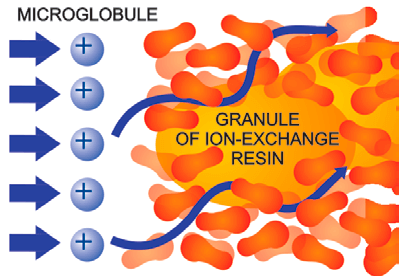 ARAGON 2 is a composite material in the form of solid block made from Aragon polymer with a bacteriostatic additive of silver and granules of ion-exchange resin.

Hardness salts, dissolved and colloidal iron, heavy metals and their compounds are removed due to ion-exchange properties of resin and polymer. Ion-exchange resin increases hardness salts removal resource of ARAGON 2 by 12-15 times compared to ARAGON material.

The ARAGON sorption capa-city is comparable with the best brands of activated carbon which provides removal of active chlorine, chlorine-containing compounds, and organic compounds.

The mechanical filtration of all particles with the size larger than the size of the external pores of the material is performed on the surface. The filtration channel has a complex tortuous form with a gradient porosity preventing discharge of filtered impurities into the purified water that often happens during pressure jumps. The number of free channels in the material gradually lowers decreasing the pressure of the purified water*. Aragon-based filtering element can be used repeatedly.

The labyrinth internal structure of ARAGON acts as a barrier for microorganisms. The majority of bacteria and viruses have oblong shape (from 0.5 to 20.0 mkm), that is why they are trapped in the tortuous channels of the material. To suppress the growth of microorganisms absorbed in the polymer, silver is inserted into the material in the form entirely preventing its migration into the purified water.

Quasi-softening is the unique feature of the ARAGON material. The structure of hardness salts is changed in water passing through the filtering material. As a result, no scale is formed in purified water. The water acquires the properties having favorable effect on living organism. More detailed information on effect of quasi-softening will be discussed hereafter.

The material has high mechanical strength with the possibility of mechanical treatment (cylinders, discs, etc.). Compact and efficient filters based on ARAGON material are unified in accordance with main international standards. The ARAGON sorbent was successfully used for water treatment in the regions exposed to contamination after the Chernobyl accident.

* Water pressure drop indicates the necessity of regeneration or replacement of the cartridge.

The “quasi-softening” effect is achieved without any additional equipment being a unique property of filtering material. Considering the fact that aragonite water does not form scale and graduallydissolves old deposits one can suggest that similar effect of such water can be observed on living organism, dissolving nephroliths (kidney stones). The influence of water filtered through Aragon material on living organisms was studied at the Military Medical Academy (St.Petersburg). Two blind experiments were conducted on two groups of white rats within the period of 30 days. Animals of the first group were receiving hard tap water, while animals of the second group were receiving the same water but filtered through the Aragon material. Prior to giving the water to the rats of the 2nd group, the filter was operated in hard water for a long time. As the result it was saturated with calcium and magnesium salts and the hardness value of initial and filtered water was almost equal. This allowed factor of chemical change of water composition to be excluded, retracing the influence on rats of “quasi-softening” effect only. The most significant differences between animals of different groups were obtained based on the analysis of urine deposits (see fig). Urine of animals of the first group contains large crystals capable of forming nephroliths. Moving, these crystals inflict mechanical damage on internal tissues of kidneys and urinary tracts. This hypotheses is confirmed by the presence of proteins and blood in the urine. These micro injuries can contribute to the development of internal infections. 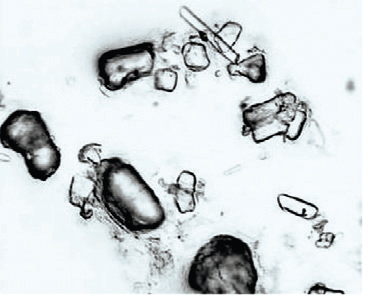 GEYSER
Více
Skrýt
Váš jazyk
Zpět
Kontaktní formulář
Požadované pole
Děkujeme
Zpráva odeslána, odpovíme vám na zadaný e-mail
We use cookies to understand how you use our site and to improve your experience. This includes personalizing content. To learn more, click here. By continuing to use our site, you accept our use of cookies. I accept